This interview was originally published in Icelandic at Vodafone.is under the name “CrankWheel - From Google and a Sales Career to an International Startup in Iceland”. 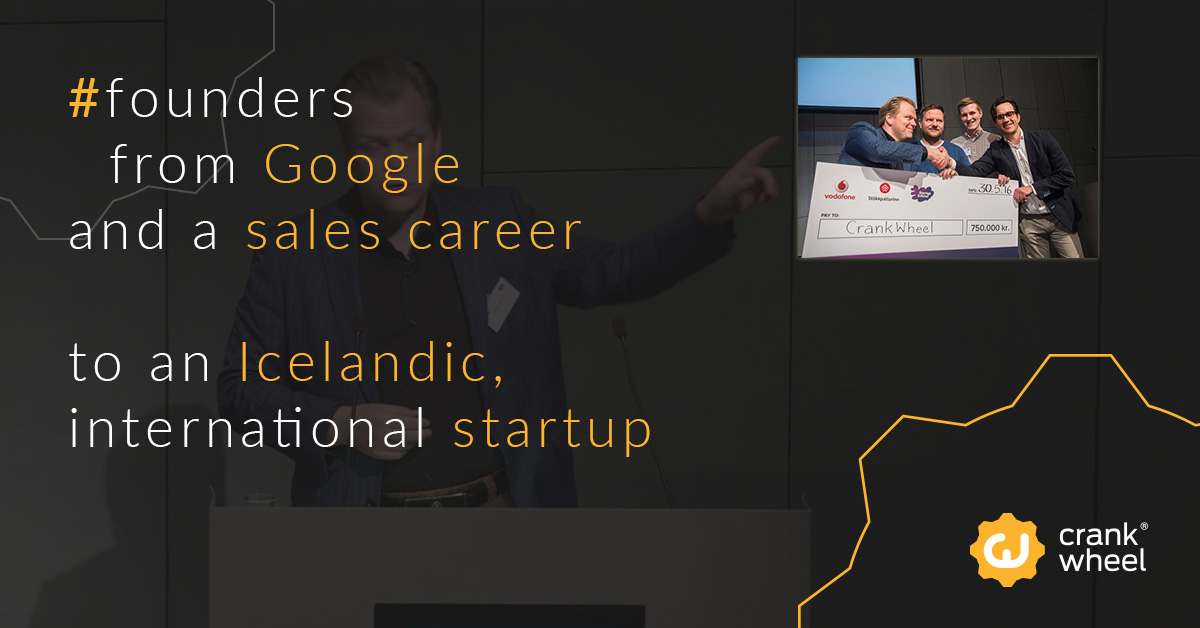 CrankWheel is one of the two winners in the “Stökkpallur” startup competition sponsored by Vodafone Iceland. The product allows companies to securely share their screen in real-time, in just seconds. The company already has enterprise clients like Íslandsbanki bank, Yell and Hertz, and is planning further conquests.

There is no requirement for complicated, technical equipment for the viewer connecting to CrankWheel. All the viewer needs is to be connected to the internet on a phone, computer or tablet. With this technology you can make calls that facilitate and accelerate sales and service greatly.

Get a Demo of CrankWheel

CrankWheel has been established just under two years ago, though the idea for the service came about half a year earlier. The emergence can be attributed to the founders, Jói Sigurdsson and Gilsi Sigvaldason, looking to make use of real time communications solutions in customer relations. Jói had experience in development from working in Google in Canada, and noticed that sales and services are typically done over the phone. Gilsi has worked as a salesman for over 15 years, spending endless hours on the phone „either to send e-mails or to call and book a meeting, to meet people and show information on computer screens”. Speeding up the process and making it more effective without requiring any technical knowledge from recipients was worth considering.

„In my work with Google I was developing a browser-based real-time communications platform called WebRTC, but there were limitations who you could talk to through that.”

The receiver would have to use the latest version of one of a few browsers - which could often be a problem,” - says Jói, who worked at Google for 10 years, and has 20 years of experience in the software sector. He and Gilsi say they wanted to develop a communications solution that people could count on to always work and that would not require any complicated setup. „This could be a tool for sales and services in a variety of sectors where people need it to work - every time and in seconds,” says the co-founder. The description „Software-as-a-Service” fits well with CrankWheel - as it’s a software product available for a subscription.

The company quickly took off and within four months started user tests and cooperation with selected companies. The first customer was secured within half a year of operation and since then the user base has increased rapidly. CrankWheel employs six people including Jói and Gilsi, thereof one person located abroad.

From Banks to the Yellow Pages

CrankWheel’s target audience are in particular companies highly dependent on the use of phone calls to talk to customers (eg. sales departments, customer support, advertising and software manufacturers), or to talk to smaller, independent professions like hair salons or craftsmen. As Gilsi explains: „it’s for all those who are on the phone or communicating with customers and want to show them something”.

The clients of CrankWheel include Íslandsbanki bank, Hertz and “Yellow Pages” both in the Netherlands (DTG) and the UK (Yell). „The bank, for example, is very concerned about providing quality service and has strict security requirements, which we are happy to prioritize” - says Jói. „At the same time, the bank is just like the insurance sector, where the number of branch offices is continuously being reduced to decrease overhead, while trying to maintain the same level of service,” he adds. “CrankWheel is a tool designed to facilitate such operations.”

Foreign customers of CrankWheel have largely come from presentations at various technology conferences or after having experienced the service as customers of other companies, and subseqently gotten in touch. „For example the Yellow Pages in the Netherlands, the first foreign customer of CrankWheel, held a presentation using CrankWheel for an Italian company that then became a customer. Subsequently, Yell in the UK joined as a customer after a presentation where the Italian customer used CrankWheel!” - says Jói. According to the founders, CrankWheel is extremely simple in implementation. „It’s nice to be told by a customer like Yell, who used another solution in the past, that switching 400 people to CrankWheel can be done overnight.” adds Gilsi. Today Yell has close to 700 CrankWheel users.

„CrankWheel is really designed for professionals who are not necessarily technically minded. It should be user-friendly with high utility and the key point is that we do not require anything from the end user.” says the co-founder. „CrankWheel is supposed to work just like you can call people with different handsets without having to worry about whether it’s working. Always.” - he adds.

Asked about how working in the Icelandic startup/innovation ecosystem is today, Jói and Gilsi reply: „There are things that are very positive here.” They mention the relatively easy environment, less complexity and a good support network.

According to Jói CrankWheel has tried to take an active part in the innovation community in this country and to also help others. They have been active in the Startup Iceland and Jói has also been a mentor in Startup Reykjavik and Startup Energy Reykjavik for many years.

As mentioned before, CrankWheel was one of two winners of the “Stökkpallur” startup competition sponsored by Vodafone earlier this year and Jói says it was a great thing. „It was extremely useful to cooperate with Vodafone employees regarding things that help in our product development. For example, we learned how telecommunications companies such as Vodafone would approach selling products like ours, their security concerns and more. The cash benefit is also nice.” - he adds. „It is also nice to be able to mention in conversations that we have achieved success with international names such as Vodafone and Hertz”.

CrankWheel has benefited from support of the Icelandic Technology Development Fund. “We are in year 2 of a 3-year project grant from the fund, which is a great help. We also received a 12-month marketing grant from the fund last spring, which allowed us to add our 6th team member, who is specialized in marketing Software-as-a-Service solutions.

Ahead is more of the already started expansion. „There is a lot of creative people in Iceland and also people are very willing to take on whatever projects they need to,” says Jói. He mentions as an example that CrankWheel developers help to sell at conferences - which is not necessarily the default in the software sector. “You could also say the brand of Iceland has helped a lot from time to time. For example, last summer we were wearing the Icelandic soccer team jerseys at a sales conference. Everybody came to our booth even though it was in a poor location,” adds Gilsi.

There is every reason to continue to monitor CrankWheel.